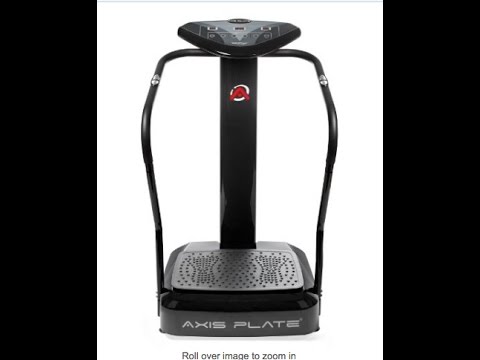 This video is a review of the Axis-Plate Dual Motor E6600 Whole Body Vibration Platform.  It gives a few reasons why this machine was chosen when compared to other WBV machines and how to use it.

The Axis-Plate Dual Motor WBV Platform is a popular machine for homes and fitness centers.

[Transcription]  Hey everybody this is not another wave review.  I thought I would do another video on something a little different this time something I’ve tried out for a couple of months and I thought I would share it with you.  It’s called the whole body vibration machine and I don’t know if you’ve heard about it but these are machines that you can buy in Amazon and various other places and there’s a whole variety of them.

They range in price from a hundred and twenty dollars all the way to six thousand dollars.  The six thousand dollar ones are industrial ones that you might see in spas or in gyms.  And specifically when a whole body vibration machine is it looks sort of like a large scale with a base on the top that has a digital board and handles.  And so you step onto this large base that looks like a large scale and you hold on to the handles and you program you know what you want.  If you want five minutes ten minutes or if you want to follow a certain program.  And then you just stand there.

I have problems with my knee and so I thought I would do that.  And I thought okay maybe I’ll lose some weight too.  A lot of people jump on it thinking that it’s going to help you I’ll lose weight and I’ll tell you what my experience has been.

If you just have to look into it I bought one that just did this and did it at extreme high speed and it actually hurt.  It helps with your circulation too and it is like a form of exercise depending on how you stand on it you can fill your muscles pulsating muscles that you’ve never felt before like in your back on the side of your thighs.

I mean no matter how many sit-ups you do or what have you you’ll never feel that type of intense muscle reaction like you do on this machine.  So that’s a really good thing.  It also helps with detoxifying the body and that was the part that was a little difficult for me.  How it detoxifies your body is it’s working with the cells and on a molecular level.  And while you’re shaking up everything it kind of brings everything out of you.

And so once you get started on it you will get sick.  I did and I got sick like the first couple of times I did it and then I actually stayed sick off and on for about a month and I realized it was because of the machine.  So be forewarned you might get you know stuffed up nose you might get a headache you might have other symptoms and that’s something to be expected.  But always drink tons of water to flush out your body.

This machine also is good for helping you relax – after you step off it, it helps you sleep.  It just makes you feel ready to get in bed into sleep as well – or to start your day.

So I’m gonna go through a few things about my machine and I’m gonna put down below on the machine that I bought on Amazon so you can take a look at it.  I chose this machine because of the price, at the time was about two hundred thirty nine dollars.  Also because people were saying that was easy to put together and it was.  I put it together myself in about a half hour and so that’s not bad most of the pieces already together.  There are some machines that take you hours to put together with tons of screws and this one wasn’t that.  Also it seemed pretty sturdy and so that’s why I chose this one.  I also chose this one because it had just the one motor.

One thing I would suggest there’s a book on Amazon by a woman I don’t even remember the name of the book but there’s only one book.  So you can find it on getting started with whole body vibration system and her book is very interesting it tells you all about how it works and the best type of machines to get and the ones to avoid and how you should start off slow and that’s what I did.  So that’s a really good book to read before you step on one of these machines.

The machine has programs and I have three programs in each program lasts 10 minutes that’s the maximum you should be on this machine 10 minutes maximum a day or 10 minutes in the morning and 10 minutes at night.  But to start off seriously you should only do like 30 seconds.  I’m serious 30 seconds it’ll feel foreign to you and you’ve got to get your body used to it.  If you just jump on it and do ten minutes you will be sicker than a dog.  You will feel uncomfortable you’ll think I don’t know if I can stick through this your body has to work up to it.  You know you wouldn’t just roll out of bed and and do 25 mile marathon without preparation would you?  So think of this as that.

Okay I wrote down a few things about it.  Like I said the programs that I have for ten minutes and I’ve worked myself up to that.  I only did thirty seconds.  My mother has a machine she only does ten seconds and she said that she can already feel the intensity and her calves and thighs.

Does it help you lose weight?  It’s helped me lose maybe one and a half two pounds so I would say no.  Don’t expect to lose weight from this.  If you do this in combination with other things then maybe.  My only other exercise right now is walking my dog three times a day and sometimes taking them on hikes and stuff like that but that’s all my exercise.  I don’t go to a gym or anything like that.

So it didn’t really help me lose weight but in two weeks I lost three inches off my waist.  So I didn’t lose any weight but I lost three inches off my waist.  Isn’t that amazing?  And then I lost about an inch and a half within a month from all over my body.  So I would suggest you measure everywhere in your body before you get started so you can kind of chart your results.

Let’s see I would also suggest getting the extended coverage through Amazon.  It’s probably if it’s a $250 machine you’re only going to pay like $25 and that’d give you coverage for three years.  Because mine is doing great right now but on occasion when it powers down to the last few seconds it’s supposed to do five beeps and there’s been a few times where it has it beeped.  So I don’t know if it’s something’s about to happen or what.  Then I step on it the next day and it’s fine.  But I do have the extended coverage and I’ve kept the box I have it in the garage in case it has to be shipped back.  So I suggest you do that as well.

Read the reviews too.  Don’t just select the one that I bought.  Figure out what’s important to you.  If you have if you’re really handy and you don’t care how many screws and your handy with IKEA furniture then pick whichever one is best for you.  There’s some from China that are really intense ones that I almost bought that were about five six hundred dollars but I ended up not getting those.

Also make sure that let me get one that can handle your weight.  And if you want to see more results too there’s also charts that you can buy on Amazon.  I think it’s kind of expensive for a chart but it tells you different type of exercises you can do while on the machine to target different parts of your body.

Now that I haven’t really done that.  The only different things I’ve been doing is I’ve stood up forward as I’ve turned around backwards I’ve leaned in on the machine and then I feel more vibration on my back.  I have bent my knee slightly and that changes where the vibration is going.  So I’ve made small little tweaks and that seems to be working for me so that’s about it.

I put this video up because I don’t see very many videos on full body vibration with people answering questions that people may have.  And so that’s why I decided to post this.  I might even write a short ebook and put it on Amazon to help people out too.  But if that’s something you’d be interested in why don’t you put the comments below and let me know.  Okay I think that’s about it I hope this helped you take care. [End of transcript]